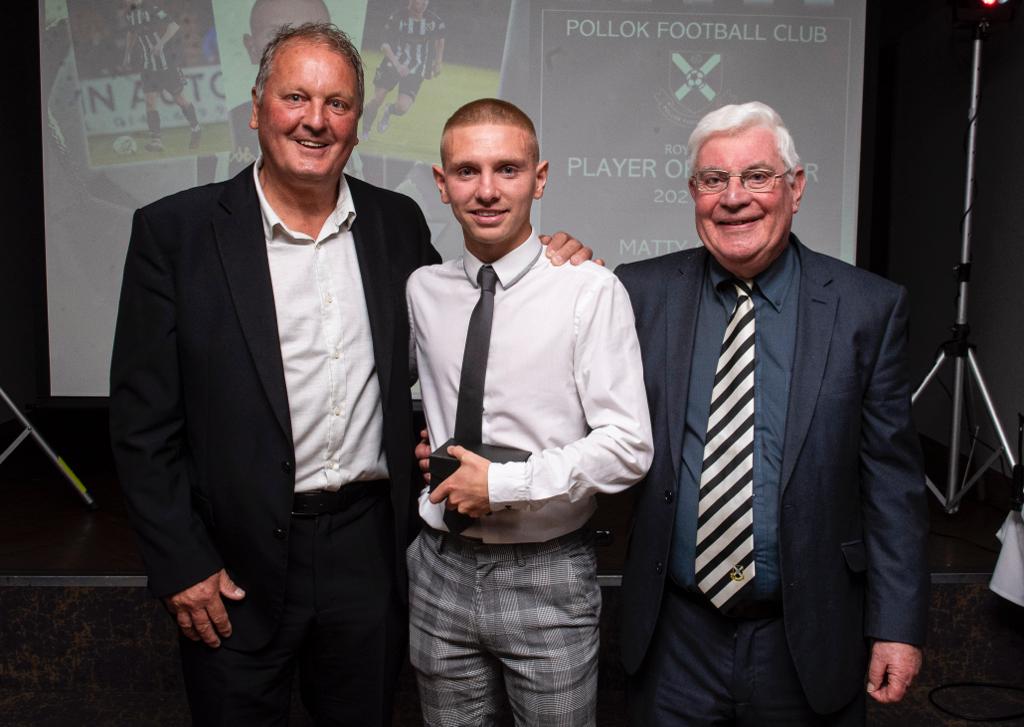 Our player of the year night made a grand return on Saturday 7th of May.

A great time was had by all, enjoying a celebration of all that we have achieved this season.

The player’s first award to be presented was the fan’s forum player of the year.
Del Esplin picked up this award based on the man of the match votes over the whole season. A worthy winner based on season-long consistency and outstanding performances.

Del Esplin again returned to the stage to collect the second award of the night.
Player’s player of the year, clearly a popular figure within the dressing room. Del was nominated by the rest of the squad for his contribution to the team’s season.
A leader and professional on and off the pitch.

Special Recognition was given to recently retired captain Paul Gallacher.

Paul chose to retire this season, ending his career with Pollok.

Paul spoke briefly summing up his time at the club and how much he has enjoyed his footballing career and being able to spend so many years with Pollok.

The top goal scorer was the next award to be presented.

Adam Forde collected this award for his 20 strikes this year.

Finding the back of the net when it mattered and providing match winners all throughout the season.

Making it a Hat-trick of awards, Del Esplin returned to collect the Management Player of the Year award.

Del was awarded this honour for his outstanding attitude and effort this season.

Young Player of the year was the next award to be presented.

Given to a Johnny Lyon who has burst into the team since joining and made himself an irreplaceable part of the first team.

Matty Grant Picked up the Members player of the Year and was the final player to be presented.

Again to a young player who has been a fan favorite since signing last summer.

Past President and Secetary Stuart McCulloch was give a special recogntion for his service to Pollok FC
Stuart has been volunteering at Pollok for over 50 Years and was presented with an award for his selfless commitment to Pollok FC.

Thank you to all who attended the Player of the Year Night and made it a great success!