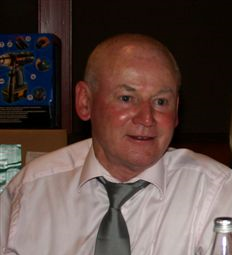 It is with great sadness that Pollok FC announces the passing of life president James ‘Jimmy’ Gilligan this week at the age of 79. Introduced to the club by another former president, Tom Fyfe (both pictured below), Jimmy joined the committee in the late 1990s and served as vice president to Avril Buchanan, taking over from her in April 2002, remaining in the big ‘President’ chair until April 2004 and was a great friend to all of West Region Junior football with his long-lasting sponsorship of the New Coin West of Scotland Cup (from 2008 onwards).

Jimmy will go down in the history books as a successful president of Pollok FC, with the team winning the West of Scotland Super Premier Division in 2002-03 and both the SJFA Super Cup and the Central Sectional League Cup in 2003-04. A successful businessman, Jimmy was very switched on commercially and did a power of work to bring in sponsorship to the club, including from his own company, New Coin Automatics.

Deepest condolences to wife Cath and the wider family.

Below are a selection of photographs taken by Kathryn MacLeod of the teams Jimmy was president of at the time and various social occasions.