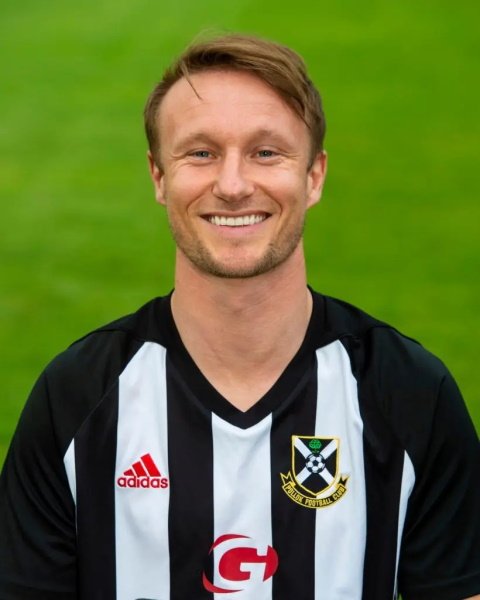 Iain Russell brought the curtain down on his playing career over the close season, bringing to an end a journey that began in the blue of Rangers and ended in the blue of Cowdenbeath! He began his career as a schoolboy on the books of Rangers, and while still a pupil at Annan Academy made 5 appearances for Scotland Schoolboys. He signed professionally for the Ibrox side aged 16, but he never made a league appearance for them however and left in the summer of 2002, departing for Motherwell. He made his league debut for Motherwell away to Hearts as an 88th minute substitute in September 2002 and made six appearances for ‘Well in all competitions.

Footage below of Iain’s debut game… he gets a close-up at 1h 44m.

Above – a youthful Iain in ‘Well colours

Regular football came to Iain when he joined 3rd tier Dumbarton 6 months later, and he found the net 33 times for the Sons in his first spell there. He honed his reputation for finding the back of the net with a switch to fellow League One side Brechin, netted 21 times for them in 2006-07 and was voted Second Division Player of the Year that season. Those goalscoring exploits landed him a switch to Morton, though despite featuring regularly for the Championship side for the first two seasons, he spent his final year at Cappielow mostly out on loan back at L1 level. Livingston snapped him up for the 2010-11 L1 campaign and he helped them to promotion with 22 goals. He added the same and more in his two Championship years at Livi then 32 for Queen of the South over three seasons back in his home county.

The ‘million pound’ man – worth every penny!

Airdrie became his tenth club in 2016, and he rewarded the Diamonds with 18 goals, though at the end of that season, with a year on his contract, he hung up his boots. Dumbarton coaxed him out of retirement in January 2018 and he remained there for 18 months before his summer 2019 transfer to Lok.

Iain made his Lok debut in a 10-1 win over Shettleston in July 2019 and while he was not on the scoresheet that day, he did not have to wait long, bagging a hat-trick in an 8-0 win over Maryhill 4 days later. He made 21 appearances for Lok before the season shut down, scoring 8 times.

He spent the Covid-hit season on loan at Cowdenbeath before announcing his retirement in the summer of 2021. All in all, he netted over 200 goals at Senior level, the last coming in the last minute of his last ever match, from the penalty spot as Cowdenbeath beat Albion Rovers 2-0 in May 2021.

Manager Murdo MacKinnon had the following to say about Iain after his decision to call time on his career:

“I would like to go on record in congratulating Iain on a fantastic career, scoring over 200 senior goals along the way. I would also like to thank Iain for all his effort and his professionalism during his time at the club. He has been a fantastic pro and a brilliant influence on our young players. We all wish him well and look forward to welcoming him back in the future as a supporter of the club.”

Iain, clearly no stranger to a wide selection of clubs, was recently confirmed as the Club Manager of the East Renfrewshire Golf Club and congratulations are due for that transfer from Mar Hall!

All the best in your retirement Iain and what a career!